After a disastrous experience at Yosemite last year, my boyfriend and I decided to apply what we learned and booked for two nights in the small town of Trikala. That was just perfect for a city exploration on the first day, and the famous visit of the monasteries on the second day.

I guess to replace bar hopping by monasteries hopping is just another proof that I’m not 20 anymore… My friend Catherine from The Go Fever, suggested to create a hashtag so it sounds cooler. So here is it: #monasterieshopping. Feel free to use it on Instagram.

The city is located around 30 minutes of bus from the monasteries, but we didn’t regret our choice. First, a whole area is for pedestrians only and all historical sites are easily walkable from the main square. It is also the paradise of terraces and it was perfect to enjoy Greek foods.

You should definitely try the restaurant with pastel chairs, on the corner of the florist. The food is amazing, and the service is great! 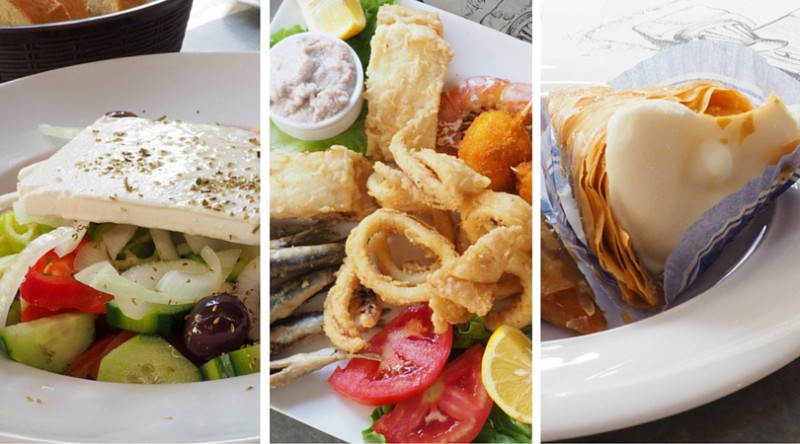 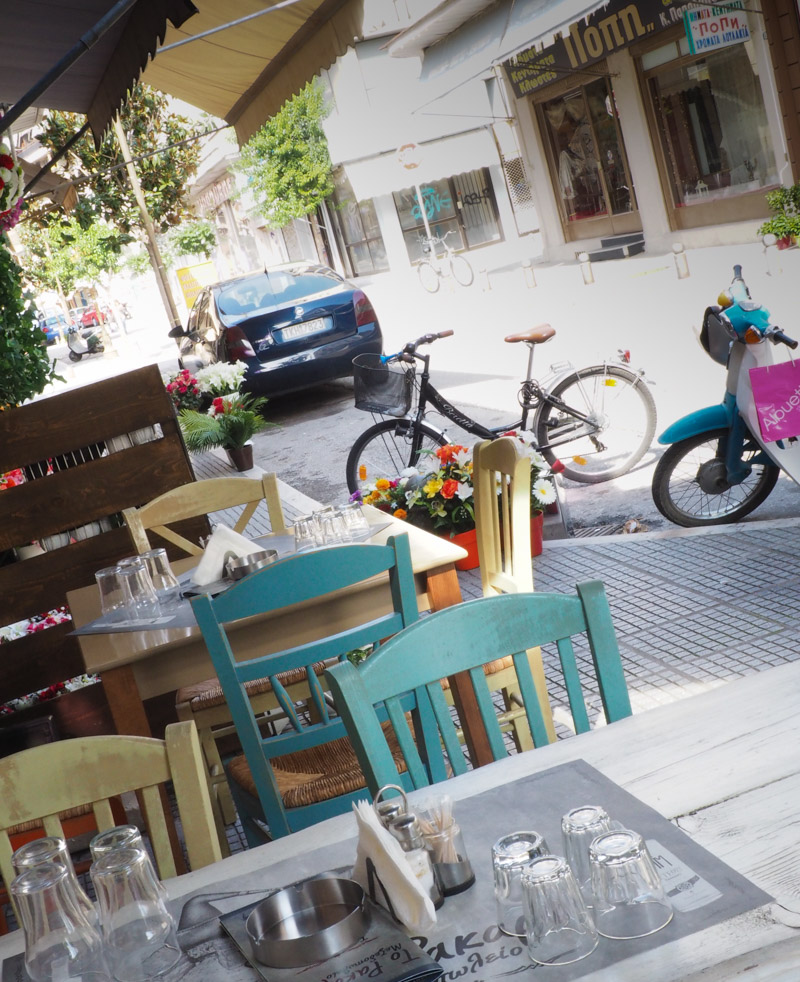 We walked in the traditional neighbourhood of Varoussi.

Narrow paths through colorful buildings lead to the clock tower, the emblem of the city. No need to follow a map, you’ll see the tower from pretty much anywhere in town.

I won’t lie to you, there’s not much to do in Trikala. But, if you’re like me and love to just walk around and take pictures, you’ll truly enjoy venturing in Varoussi. It’s what pastel Instagram pictures paradise is made of. 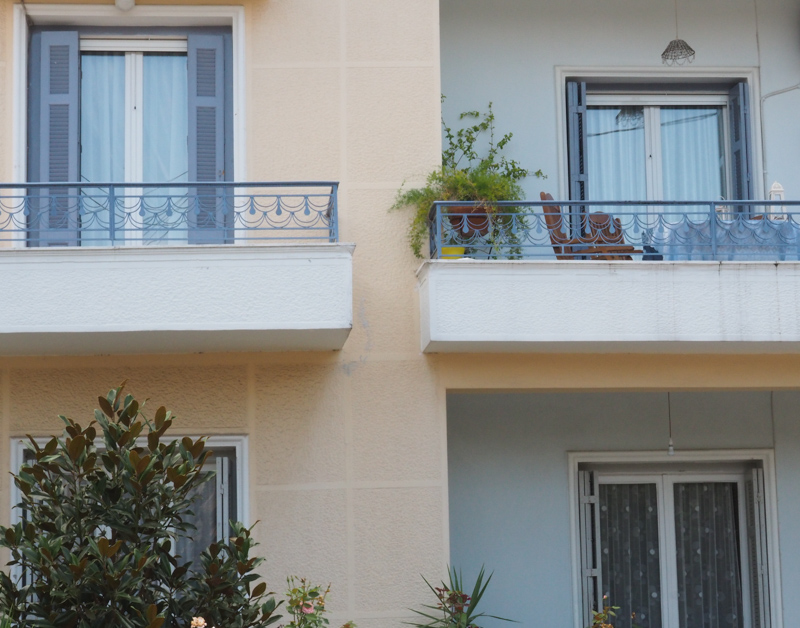 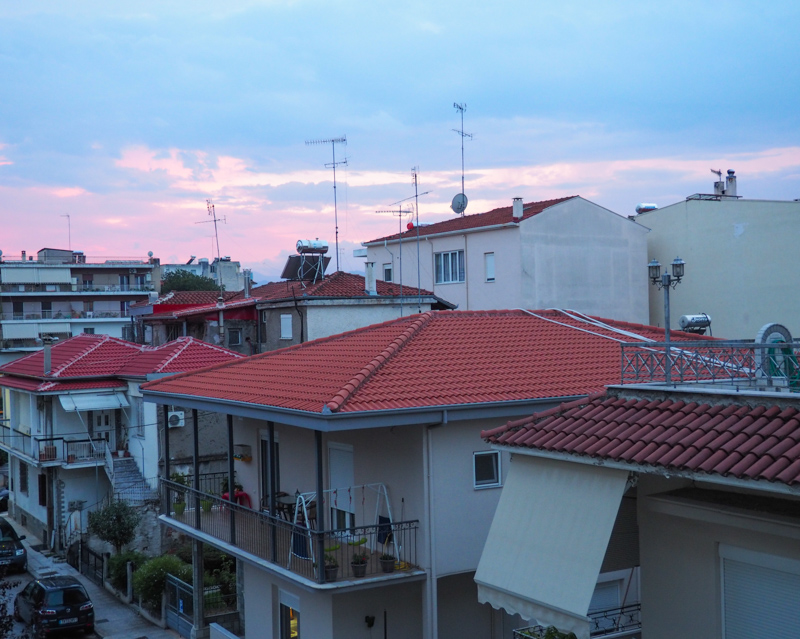 The biggest and oldest of the monasteries is the Great Meteoro. It is also the most popular, so expect tourist buses and stands of trinkets.

Once you reach Kalambaka by bus, you have two choices: walk to the monasteries or reach them by bus or cab. My boyfriend still had a lot of trouble with jet lag and didn’t sleep well, so we chose de lazy way and reached the first monastery by taxi.

Fortunately, the crowd doesn’t harm the beauty of the place: It is breathtaking. 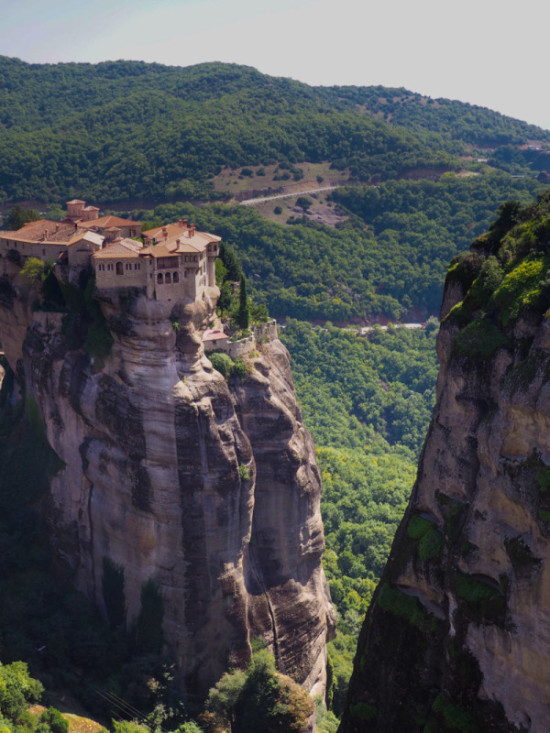 I can’t believe people built monasteries at the edge of cliffs like that. You really need to believe in God do to such a thing. Oh wait…

My boyfriend thought it was super romantic to stand there, looking at the infinite landscape, and I was like « Hey! Did you know that Meteora is where Tyrion is held prisoner in a skycell? That’s awesome! » So I kinda killed the moment, but I think Games of Thrones references are mandatory.

Of course, the inside of the monastery doesn’t look like a skycell (unfortunately). Personally, I could have skipped this visit without any regrets, but if you are into « Jesus’ stuff », you might want to take a look. It only costs  around 3€ per monastery to go inside. Important fact for women: you need to cover your shoulders and wear a skirt. No pants allowed for women. Don’t worry, since hiking in skirt isn’t really practical,  there’s wrap around skirts that you can borrow for free. 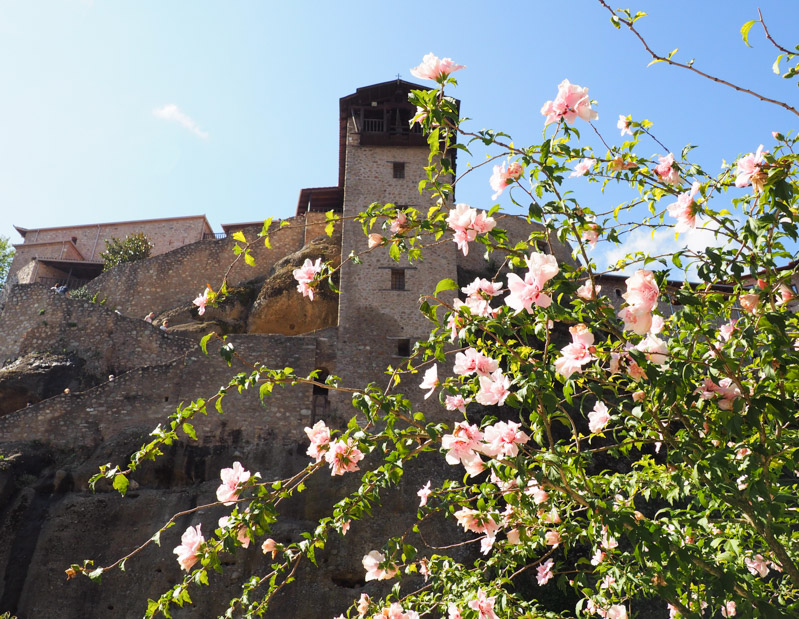 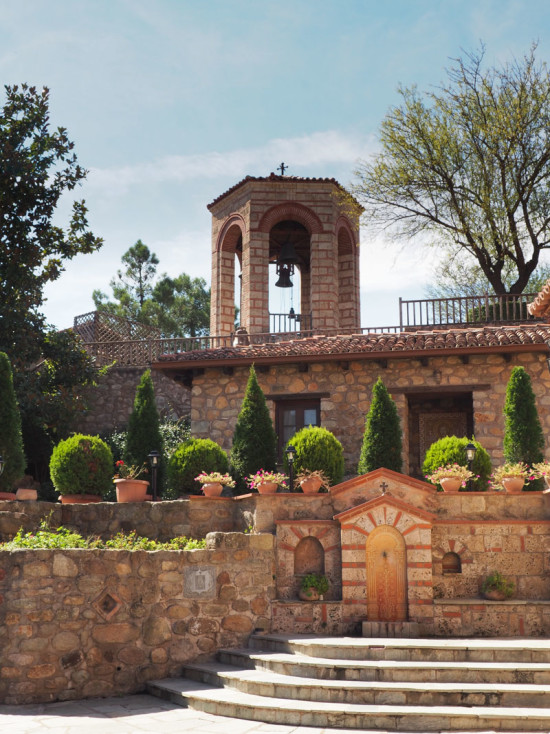 Despite our laziness to go up, we decided to go down by foot.

Far from the buses, the path is completely quiet. You’ll pass through forests of twisted trees and mushrooms to reach one of the most beautiful views I’ve seen.

It is a chance we met Belgians hikers who explained to us where to find the path, because it is far from well indicated! Ahah! My advice would be to ask instead of trying to find it with the touristic map that focus more on restaurants than on useful trekking information.

Count around 3 hours (including a lot of breaks to take pictures) from Great Meteoro to Kalambaka, but it’s an easy walk since you are going down. 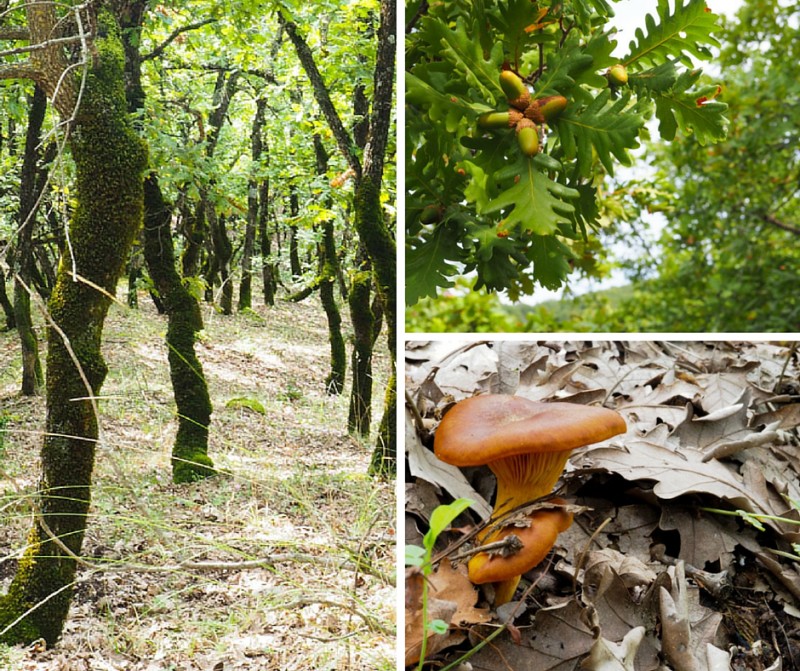 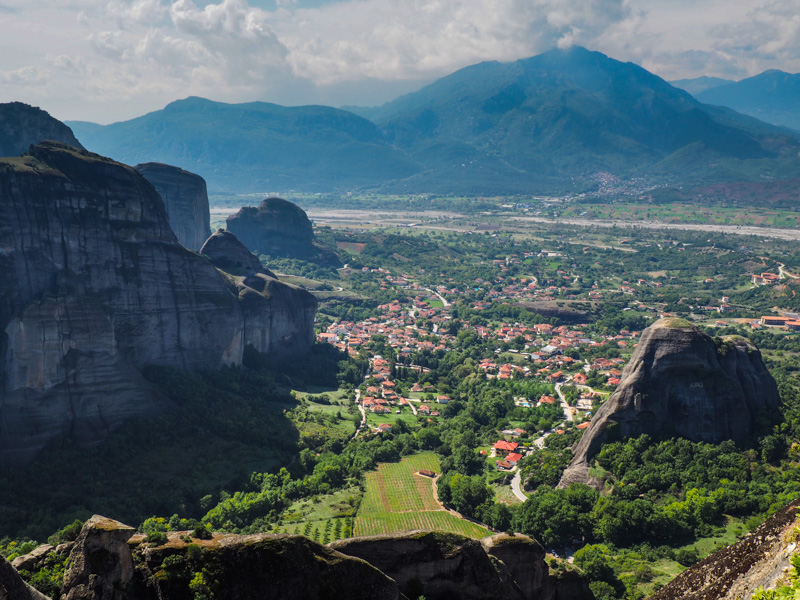 And the view from the bottom is not less impressive… 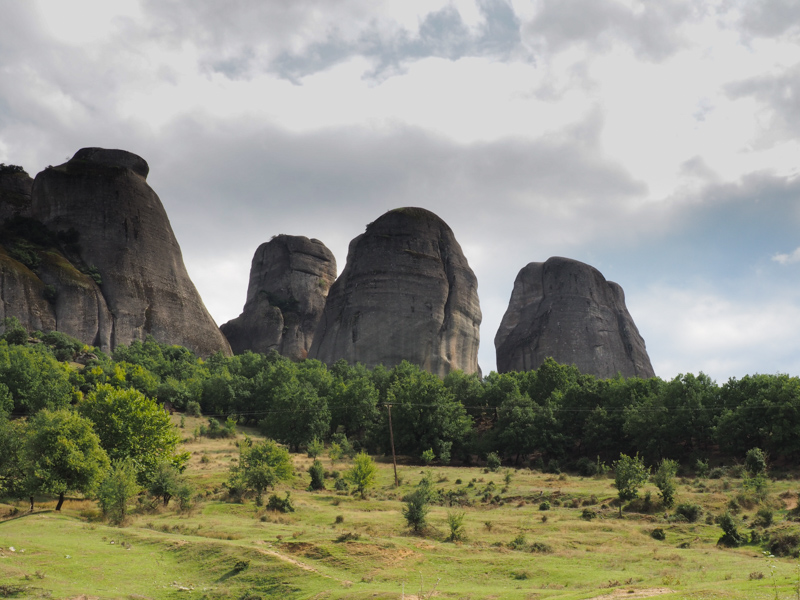 After two hours of walking, we ended up on a paved road and really wonder wich way we had to take to go back to Kalambaka. Fortunately, a car passed by the road and people could show us the right way. Really, some investments should be made to improve the indications for walkers.

The path end in the small village of Kastraki, just at the bottom of the rock formations. It is the best place to stay if you want to have a view from your hotel room. 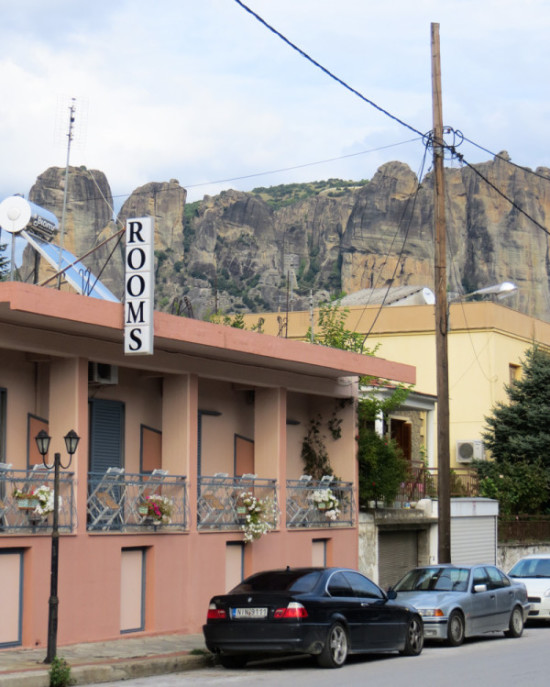 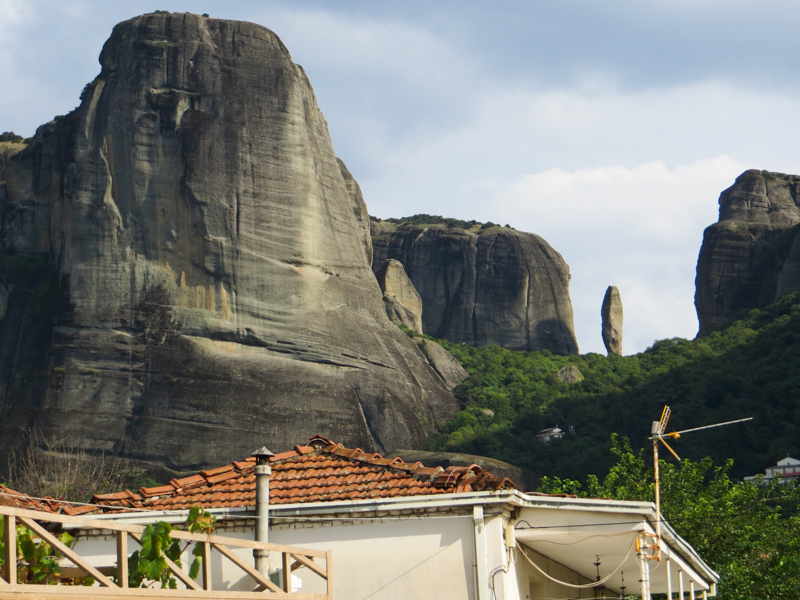 Personally, I think any visit to Greece would be incomplete without a stop to explore the wild beauty of Meteora. For practical info, take a look at Visit Meteora.