To be honest, I was supposed to go to Turkey. I even announced it to everybody I know, but I chose to postponed my trip for the second time.

So Turkey, when you’re ready, raise your hand, because I’m waiting for you!

I mainly chose Greece because it’s beautiful, and despite the fact that there’s a crisis, I won’t deny it, its sun, its beaches, its culture are not in crisis. For tourists, I am confident that it will be business as usual, and I am not scared at all to explore this country.

Then, I spent a day shopping for an alternative destination.

Did I choose to go to Greece because it was the cheapest flights? No. I could go to Central America.

Did I choose Greece because of the crisis? Yes and no. 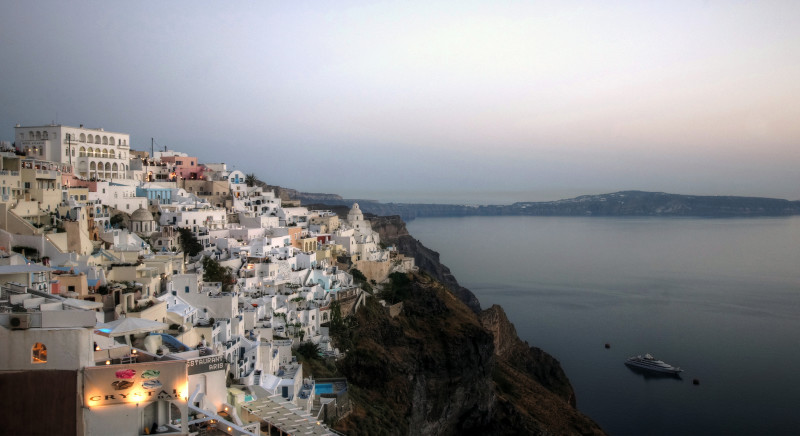 The main concern I hear around me is about the now famous « 60€ maximum » withdrawals. Once again, we need to say that this apply only to Greeks and not to tourists. You can withdraw the maximum limit set by your bank, which can be higher than 60€. Credit cards are working too.

To reassure people around me thinking I’ve made the worst decision ever booking my next trip to Greece, I asked travel bloggers who are there now to tell me what is the real situation. None of them work for any official press, and they have no interests in lying about what it is to travel in Greece now. Here’s what they have to say:

While parts of the country have empty ATMs, Santorini has plenty of working ATMs, as do many other tourist-oriented regions of Greece. I’ve talked to travelers in tourist zones and even in Athens, and none have had any problems.

« So, what’s it like to travel in Greece during an economic meltdown? So far, here in Santorini, there are zero differences whatsover.

Greek are limited to withdrawals of 60 EUR per day. International bank account holders can take out as much as they want. Credit cards are working. Of course, the situation could change at any time. But if you’re worried about your upcoming trip to Greece, DON’T BE. Bring a lot of cash and stay up to date on the news. »

All have been remarkably normal. Don’t believe everything you see on TV. »

More than ever, Greece needs tourism and the industry is working hard to ensure travellers enjoy their stay. Also, you need to keep in mind that a lot of companies in the tourism industry are locally-owned and have nothing to do with the government. Therefore, hotels, hostels, restaurants won’t close their doors if there are clients to serve. Ferries and yachts will continue to sail to islands. The only things that’ll look like ruins are well… ruins.

« Now may, in fact, be the perfect time to go to Greece. Not for financial or seasonal reasons, but because the Greek economy needs it. Tourism is going to be a vital asset to rebuilding the community and stimulating the economy. There is no danger in going to Greece – there are no epidemics or violent riots, and especially in tourist destinations, all is still operating as normal. »

If you want to support Greece, the best thing you can do is to go there, and spend your money enjoying your trip. Greece is in a turmoil since a couple of years now and tourists have never been affected. Go to small local businesses and pay with cash. Not because your cards won’t work, but because people are having trouble to have access to liquidity. You’ll be welcome with a great smile.

Greeks understand well that tourism is important for them. The country is a quiet and peaceful place, and Greeks are famous for their hospitality. There is no sign that this will change.

Leah, from The Mochilera Diaries

« In the face of major economic struggles, Athenians haven’t lost their positivity. Everywhere I went I was greeted with big smiles and friendly salutations. Every single Greek I interacted with in Athens went out of their way to make sure I felt welcomed in their country. »

Greek people today understand that completely and that’s why the value of unity is present in their daily life. One of my best experiences was talking to a Greek housewife who told me that the reason why food in Greece is so important to her is not because of the flavor of it but rather because it’s an opportunity to share love with her loved ones. »

“Divided we fall, united we stand” Aesop once said.

Becki, from Borders of Adventure

« The media defines your perception of a country greatly, and I can’t say enough how much to ignore the western media scaremongering over Greece right now.

Do NOT cancel your holiday there or be put off by going. Do not think this is « the worst time ever » to go.

Now is the time to spend your money in a country which needs it, while enjoying the incredible weather and the scenery. »

Don’t always believe what you see on TV

If you were in Greece right now and don’t watch TV, you may not even notice there’s something going on.

Media covers action, violence, drama, because that’s what « interesting ». Normal life isn’t worthy for media so don’t expect them to show you that everything is fine.

As another blogger says, if you happen to be in Greece while protests, just plan your trip around them as they will go peacefully.

Deliah, from Away She Goes

« I was in Greece for three months in 2011, and I noticed the worst things when I got back home in the States (OWS, brutality against protesters, terrible economy, CEOs getting away with everything). No one who was actually in the country was scared or worried, and we just planned around protests the same way I plan around Sox games back home. Remember, travel warnings from your government are a diplomatic tool, not an unbiased expression of facts. »

On my side, I’m going to Greece in September 2015, and I am aware that the situation could change. Despite the economic uncertainty, I am confident that the tourism industry won’t be affected. Any comments about the situation in Greece are more than welcome. A very special thanks to all the bloggers who have contributed to this post.